Your input is needed!

Last October, 13,606 bloggers from 156 countries started a global conversation about climate change. Joining in on the conversation were dozens of the world's leading nonprofits as well as influential voices ranging from British Prime Minister Gordon Brown to the White House.

To make Blog Action Day 2010 an even bigger success this year, we need your help in answering the following question:

What important issue do you think the world should talk about on October 15th?

Based on nominations we received during voting process for last year's topic, we've put together six potential topics for this year, outlined below. To vote on your favorite topic, click here.

Blog Action Day 2010 is just 2 months away, and we have a lot of work to do between now and then. We'll announce the winning topic for Blog Action Day by early September and look forward to hearing your voice on October 15th.

What started with one blogger and one blog in 2006 has traveled from blog to blog across the globe until it has reached 50 countries. BlogBlast for Peace is an annual blog event and is expanding each year. Join us this year.

As long as there is hope in the world and bloggers who long for peace, BlogBlast for Peace will be held November 4. If you wish to join the peace bloggers, please visit Mimi's site.

It is quite simple. Visit Mimi's blog between now and November. download a Peace Globe and personalize it with your message of peace. Then forward it to Mimi when requested, post it on your blog and promote both the event and your post as November 4 creeps in after Halloween. 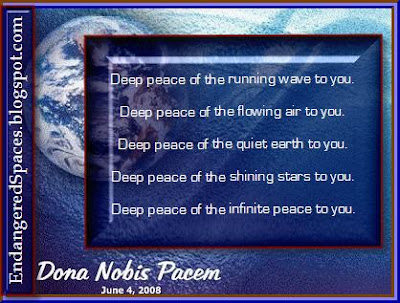